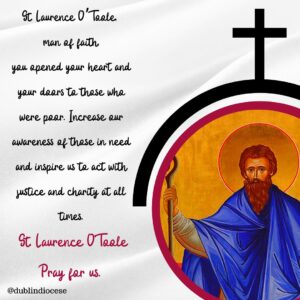 Saint Paul reminded us in our first reading that his ministry was a ministry of service for Jesus’ sake.  He himself was simply the earthenware jar charged to carry the treasure that is the saving power of Jesus Christ.

We gather to celebrate the Feast of Saint Laurence O’Toole, principal patron of the Archdiocese of Dublin.    We come together to pray for all those who in our day have responsibility in this diocese for spreading that treasure of the revelation of Jesus.

There is a sense in which, outside the Archdiocese of Dublin, Saint Laurence O’Toole is a forgotten Irish Saint.  Many of the more popular Irish Saints are linked with local culture, or with the Irish monastic missionary period, or were martyrs.  Laurence worked within a different cultural situation but one that is remarkably relevant to the current situation of the Church in Ireland.

The Dublin to which Laurence was appointed was in the midst of great cultural change.  The dominant Norse political culture was being replaced through a Norman invasion and internal conflict among the Irish chieftains.  Dublin was a city marked by violence.  Hunger, poverty, and vulnerability were the order of the day.

Today the religious culture of Ireland and especially of Dublin is also at a crossroads.  It is not the crossroads of martyrdom or oppression.  Certainly there is hostility towards the Church from some quarters.  The current change in religious culture is inspired more by indifference, uncertainty and at times voluntary rejection.  The fact that there are in Ireland today more civil weddings than religious marriage ceremonies is not by imposition.  The fact that, according to the last census, “no religion” is the second largest population group after Roman Catholics is the fruit of choice.

In some cases, cultural change may be the fruit of disillusionment at how the Church is perceived.  The recent report on the former Cardinal McCarrick will have convinced many that the governance structures of the Church have again failed victims.  Nearer home, the victims of what was a harsh, authoritarian Irish Church in the past rightfully continue to haunt the Church of today seeking answers.  Their hurt will not be healed simply by saying that things are different now.

I believe that the challenges of Church life due to the current pandemic are pointing the way towards another challenging moment for the Church. Many whose attendance at Church services before the pandemic was fragile will never return to public worship.  When Churches were reopened for public worship for the summer period, numbers were low and the demographics of those who returned were different. Younger faces were noticeably missing.

The numbers who will attend public worship in the foreseeable future will be significantly lower.  It would be foolish to imagine that many of those who do not return to worship will not find themselves also drifting away from wider bonds with Church life.  The post-pandemic Church will look significantly different to the Church we traditionally knew.

I believe that the extraordinary charism of Saint Laurence O’Toole can serve as a valid model of renewal of the Church in Dublin in the coming years. His personal way of life made him a respected and forceful voice of witness in a time of cultural uprooting.  We need a Church that can speak the message of Jesus to a world that is searching and uncertain about faith, and be listened to not because of self-proclaimed status, but through the quality of its care and vision and faith.

What were the characteristics the charism of Laurence O’Toole and why do I say that he can be a model for setting out the path towards a different future Irish Church?   Let me look at some.

The first was his evident holiness.  His was a holiness developed in the solitude of his years at the Monastery of Glendalough.  That solitude remained at the heart of his ministry as Archbishop.  Those whom he encountered thought of him in the first place as a man of holiness.  It may seem strange that those who feared him, feared most of all his holiness.  Personal integrity and holiness bear within them a striking strength that can be stronger than physical power.

The solicitude within his heart gave him the freedom to make significant choices.  He rebuilt his Cathedral Church not as a monument but as a focal point of prayerfulness. He established a praying community of monks at his Cathedral and shared personally in their daily prayer life.    He encouraged the clergy to do likewise.  Laurence did this not by the imposition of norms but by his own sense of prayerfulness and his rejection of any aura of worldliness that was alien to being a minister of Jesus Christ.

The second characteristic of Laurence’s spirituality was his evident love for the poor.  His political interventions with the Norman and Irish local kings were always a response to the perilous condition of the poor, the victims of violence and of the failure of a society that had the duty to protect them.  He was not a political priest who sat at the side-lines and commented from a distance, even when such comment might have been valid.  Laurence was known as one who opened his own house and cathedral to be places were the poor were made feel welcome and where they were sure to receive food, support and protection.

Laurence was very much someone who in his life as Archbishop encapsulated Pope Francis’ notion of a “poor Church and a Church for the poor”.  He was a man of authority who understood Christ’s injunction, as we heard in our Gospel reading, to exercise authority to serve the poor rather than to seek earthly power or recognition.

The third characteristic of Laurence’s activity was the manner in which his personal holiness and his care for the poor provided the strength for his active presence in the complex and uncertain political systems of his time.  His patent holiness represented a dimension of stability that was absent from the political intrigues of his day.

It was the authenticity of his witness that caused Laurence to be recognised as a forceful influence in public life.  His vision of the Church was one of reaching out, rather than an inward looking vision trapped in the internal in-fighting or small mindedness within the Church.

Today we need an outward looking, forward looking Church that touches the hearts and the lives of both people and society through authentic witness to Jesus Christ.  The Church must touch hearts not by constant condemnation but by opening hearts realistically to joy and hope.   Its influence on society must be transparent in showing the purity of its intentions, rather than hiding behind the false security of worldly power or of fearfully hiding just with the likeminded.  We need a Church that confidently offers the saving message of Jesus in creative language that opens to a dialogue of hopefulness.

If we remain trapped in an inner Church culture, we will end up struggling to find a place in a changed society, while becoming ever less relevant to that society.  Much of the Church language used about renewal – even important calls like that of Pope Francis to synodality  – could end up being used simply to talk about ourselves and our internal structures, rather than reaching out with a renewed sense of what the courage of missionary discipleship involves.

In our current situation where attendance at public worship is suspended, we have constantly to remind ourselves that the Christian life is not suspended.  Our Church doors may be closed for public worship, but the message of Jesus Christ belongs not just within buildings.  We must bring that message to those who are open to it, whether they are near to or distant from Church, whether young or old.

The hearts of the indifferent and of those who feel disillusioned by their experience of the Church will only be reached by a Church marked by holiness, care for the poor and by engagement in bringing an authentic Christian contribution to the common search for goodness and truth.  The figure of Laurence O’Toole points the way for the future, but that future must begin today.   ENDS