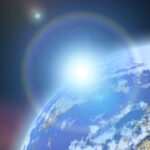 “Warp speed”, “Beam me up Scottie”, “`To go bravely where no man has gone before”, these lines from Star Trek were a part of mine, my sisters and many others childhood. The Star Fleet mission was to explore new frontiers and they got into a lot of tight situations along the way. Yet somehow, no matter the adversity, how big the enemy fleet, or the technical issues, they stuck together, and prevailed. It was almost like there was a higher power watching over them, delivering them from hopeless situations and refreshing them to regroup and set out again. Maybe it was Mr Spock’s pointy ears that kept them going!

These memories were awoken from the deep recess of my psyche during the week when William Shatner, who played Captain Kirk back then and now aged 90, was sent into space by Jeff Bezos. There was a certain amount of hype before the event, he would be the oldest human ever to go into orbit and given his age it was both an act of courage and a huge risk for him to do this. I didn’t get caught up in finding out how to watch it live, but I do admit to being captivated by his interview immediately after touch down.

The news item captured first an image of take-off, the cigarette shape rocket rising straight up from the earth, then into orbit and finally out of the bright blue sky, over the desert the little capsule with its three parachutes appeared and fell rapidly to earth, landing in a huge explosion of sand. And moments later, there he was, old yet strong, standing in the desert in
his flying suit, gushing emotion filled words of joy. He said it was the “most profound experience of my life”, clearly the reality far exceeded the thousands of times he had flown into space in the safety of a movie set and studio!

He described passing through the soft blue atmosphere of earth and into the darkness of space and looking at the fragile earth and loving it all the more. He was moved to reflect on life and death and wonder if this cosmic journey in a capsule was any way life the journey of the soul. At the end, he said “I hope I never recover from this” as is so often the case when a profound spiritual experience touches into the depth of our being, we would want to hold on to it forever. Perhaps he has had his faith affirmed, his hope strengthened and his resolve to be ready to meet his creator renewed. He is an extraordinary man, whose personal experience, now shared and seen can touch us all and move our hearts and minds to contemplation of God and as the hymn says ‘his power throughout the universe displayed.’