A stranger giving witness to their faith 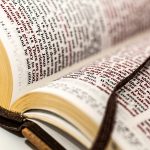 Last Sunday I sat in the pews for a change, attending the 11.00 am Mass at the Cathedral in Porto. Walking oh so slowly up the steepest set of steps I’ve ever climbed I wondered if the option of watching Fr Brian on the live steam might not have been the better choice! However having reached the majestic church, with its twin towered facade, wide plaza and spectacular view back over the rich red tiled roofs all the way back down to the river Douro, I was glad to have made the effort.

I stepped in through the narrow door and in the cool interior my glasses immediately fogged up. It took a moment for my vision to return, my heart rate to calm down and then little by little I was able to take in the interior. Like many old buildings in Porto, the two characteristics of narrow and tall, were in evidence here too. A long aisle ahead and newly restored granite columns soaring towards heaven carrying the plain roof. The huge carved wooden altarpiece, was under restoration, the top third completed, covered in shimmering gold leaf, Mary at the centre, clutching flowers and gazing down on all who gathered.

I slipped into a pew, maintaining social distance, and noticed a clean cut young man in the seat in front of me. Like most people his age he was wearing jeans and sneakers, black jacket, close cut hair and face masked, totally unremarkable, except for the well worn English ‘Daily Missal’ on the seat beside him. I had similar book, used frequently, when I was a seminarian and I jumped to the conclusion that he too was likely a student for the priesthood. During Mass he sat, like me, unable to understand a word of Portuguese, following the readings in English, he with his missal and me with my iPhone.

After the final blessing of the Mass, which ended just as the bells above pealed the Angelus, I spoke to him for a moment. I mentioned noticing his missal, told him I was a priest and asked if he was studying theology abroad. He answered in a soft American accent, that no he wasn’t a seminarian, but in fact a solider, stationed with the forces in Germany, and using some vacation time to explore Europe. The Missal he told me was a prized gift from his uncle, a priest back in Minnesota, and carrying it with him across the many countries of Europe, all with languages he didn’t know, helped him be present and attentive at Mass, and reminded him of home. He knew that while he was at this Mass listening to the story of the Wedding Feast at Cana, his folks would be hearing the same scripture in their local church, and they’d be praying for him and his safe return.

We parted after a couple of minutes but his faith, fidelity to participation at the Sunday Eucharist and his love for his family stayed with me all through the day. It is a joyful mystery, but true, when a stranger gives witness to their faith they preach a powerful message of hope.