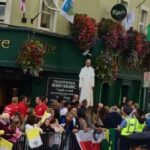 I have a Pope Francis mug on my shelf. It is a souvenir of his visit here in 2018, and very predictably his smiling face is looking out. I don’t use it for tea or coffee, but from time to time take a drink of water from it, but mostly it just sits there on the shelf, a reminder of his visit. I have three moments which I recall from those August Days. The pope mobile making its way through the city, the evening in Croke Park and the Mass in the Phoenix Park.

On that Saturday afternoon, after spending the morning watching on TV his plane touch down, his drive over to Aras an Uachtarain, I went to see him in the flesh for the first time. A priest friend came up from the country and we walked into town together to see him being driven through the streets of Dublin. Our vantage point was on the Fr Matthew Bridge, along by Ushers Quay. Directly opposite us, just outside the famous Irish music pub, a group of lads were waiting too. They had a life sized cut out of the Pope, when they held it up, the whole crowd around us chanted his name. And so we waited, in a happy throng, until the Pope mobile came down Lower Bridge Street, crossed the river Liffey right in front of us, and on to see Brother Francis in the Capucin Day Centre. The Pope is always drawn to meet the poor, the people who feed them, the crowd called out his name, and just like his image on the mug he smiled back at us.

I loved his visit here, being part of the various gatherings of people who wanted to make him welcome, who went to hear his words, to share the Eucharist with him and be part of something special. My Catholic identity is enriched by being associated with the Holy Father, his teaching, his leadership, his inspiration for living an authentic Christian life, as a sinner among sinners seeking salvation and redemption. I’m glad he came, I cherish the memories, reflect on his witness and continue to pray for him and his intentions every day. Thanks for your support of this year’s Peter’s Pence Collection which allows him to do so much good in the world.