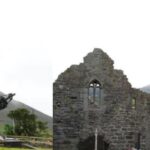 I headed over to Westport to cycle the Greenway with a friend. We had a terrific day, cycling out to Newport, past Burrishoole Abbey to our destination, Achill Island, a breeze at our backs, the stunning scenery all around us, Clew Bay bathed in sunshine, and Croagh Patrick towering above the landscape on the other side of the bay. I looked at it, loved it and was full of admiration for all those who climb it for Reek Sunday every year. I wanted to see it close up so the following morning we drove out by Glenco to Murrisk and up the reek road. As luck would have it the beautiful sunshine of the previous day deserted us and the graceful mountain was shrouded in cloud. Standing at the beginning of the path to the summit and seeing the stony route the pilgrims walk only added to my appreciation of their efforts. Strong sticks were for sale or rent, and I imagine that everyone attempting to walk up that torturous path would be mad to go without one. We didn’t attempt the climb and I’ve never been back since, so it’s still a joy to come.

We walked away with the mountain at our back and came to the monument of the Coffin Ship. It was a chilling reminder that many brave souls left Mayo for America in ships with little chance of making the harsh Atlantic crossing. No more than for the migrants crossing the Mediterranean Sea today, a watery grave was as likely as a prosperous future. The walk took us down to the ruins of Murrisk Abbey. An information board told us that it has been built in 1457 by the Augustinians and
flourished for 200 years. It declined with the suppression of the monasteries and the penal laws and fell into ruins. I hadn’t expected to find these two monuments in the shadow of the Holy Mountain, both giving testimony today to a religious past that vanished through famine, war and persecution. When we take the long view of history we see things change, nothing is certain, and learn not to hold on too tight to the model of church we have today.