The value of even small groups gathering 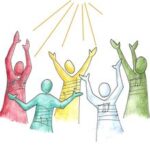 I was at Mass one day during the week at Holy Cross Monastery near Rostrevor, Co. Down. The Abbot was the presider and preacher. About 10 people made up the congregation and there were another 6 monks present. All in all, a small gathering. Mass lasted almost 50 minutes, the pace was gentle, the music really beautiful, the homily was probably a little over 10 minutes.

The Abbot explored the readings and gave a profound reflection on the Gospel values and offered some insights into how these readings might be applied to life. The main theme was reconciliation and he made a distinction between the legal process, where in the courts, with the impartial judge, attentive jury and attentive presentation of evidence, everything leads towards a judgement. In court, very often one side feels vindicated, while at the same time the other side can be distressed not to win their case. With some wisdom and insight, he compared that process with the journey towards reconciliation as an expression of faith and outcome of grace. For him reconciliation is a process where each party tries both to understand their own role in dispute, conflict or crisis and with some grace can also try to understand their antagonist. For reconciliation to be effected both parties are led towards each other, and standing on the ground of mutual respect, they can see each other. The grace, informed by prayer and reflection, brings to both sides a victory. In seeking to be people who work for reconciliation, when we are not actually in a moment of crisis, he suggested that we try and understand the roots of anger, division and conflict, seeing that very often the person who annoys, upsets or hurts us can be suffering from some stress, crisis, depression or loss and just isn’t their best self. Having that insight when we are drawn into difficult situations can helps us to seek the grace of reconciliation.

I hope I have captured a little of what I carried away from that liturgy, a reflection on the Gospel that lingered with me during that day and since then.

This experience renewed my faith in the value of even small groups gathering, people participating well and presiders and preachers having a word well prepared. Maybe the 50 minutes is better suited to the Monastery!